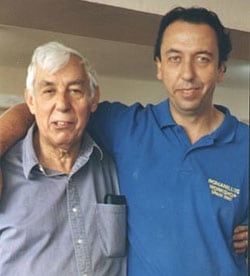 Romanillos. The name alone is iconic in the world of the classical guitar. Together, father and son, Jose and Liam, have built a tradition that has become a benchmark for guitar builders and players the world over. Romanillos guitars are provocative, emotional, soulful, some might say ‘flawless’. They embody the very essence of what guitars were created for: translating your innermost emotions directly from your soul into audible sound that can be intimately shared with your audience.

Several years ago Jose and Liam made the decision to share their art with any Luthier who was eager to learn, and they began their annual guitar building courses. These courses, held in Siguenza, Spain became a magnet for the hearts and minds of many highly promising Luthiers. And come they did. From all over the world, they come to learn and to infuse, as if by osmosis, that elemental awareness that joins hands and wood in just the right way so that the flow of music is allowed through the wood and into the experience of the listener.

I am honored that I have been selected as the exclusive US dealer of Romanillos guitars., and during the conversations that led to this partnership, Liam and I discovered that we shared a desire to create a forum for promising Luthiers who one day might represent a future ‘Romanillos’ or “Bouchet” or “Hauser”. 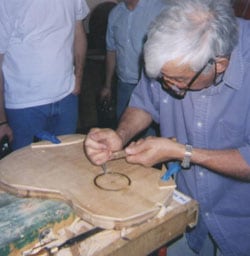 It was Liam who graciously suggested that he and his father could occasionally select the very finest luthier from their classes, and that I might present this promising Luthier in some way to the guitar world. In this way we could assist an individual with great talent and potential, by introducing them in a manner that would be otherwise difficult to achieve.

Liam was sensitive to the fact that I represent the very finest Luthiers on the Planet. Romanillos, Dammann,Bruck, Humphrey, Ruck, Redgate, Bernabe, Byers and others. Yet there was a time when each of these Luthiers was unknown, and struggling to share their ideas with the world. What if we could provide a very talented Luthier with an opportunity to be introduced to the guitar world, and in doing so, what if we could provide a platform for them to be considered by players on a global basis, long before they might otherwise be discovered?

Over the past few years of running the course, Jose and Liam have come across certain luthiers who have impressed them with their knowledge, understanding and superior craftsmanship. So being aware of the difficulty to get a foothold in the market we decided that it would be good to give them a chance to display their work on a world stage. 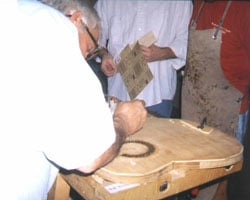 These individuals will be acknowledged and provided the opportunity to have their instruments showcased on my web site, classicguitar.com, which is viewed by players around the globe. It is the hope of Jose, Liam and myself that this exposure will benefit both builder and player by introducing builders who possess the highest level of talent. When I visited Liam recently he shared with me that their standards for this honor are so high, that even though they are familiar with many very talented builders, only TWO were at the level that Jose and Liam felt they could place them in this coveted category of being a ” Romanillos Selected Luthier “

The very first Romanillos Selected Luthier was Claudio Meneghelli from Switzerland. Claudio’s guitars have been so well received that eventually he was invited to be a ‘featured luthier’ for Classic Guitars International, an honor in and of itself. You can read about Claudio in the featured luthier section of my web site and by CLICKING HERE.

It would be two years before Jose and Liam would select another luthier, English builder David Merrin. David’s guitars also were instruments of such high quality that he too was invited to be a ‘featured lutheir’ for Classic Guitars International. To learn more about David and his guitars CLICK HERE